The number of people we were able to see per day tripled from one day to the next, and we were now serving about 300 people per day.

The Haiti Naturopathic Clinic was founded in response to the devastating earthquake in 2010, first as a mobile clinic offering free natural healing to thousands of destitute people. The clinic has since become stationary, offering free treatment with herbs, essential oils and homeopathy to about 10.000 impoverished people of the suburbs of Port-au-Prince every year. Since medical care is expensive in Haiti, for most, this is their only access to treatme. Half of the patients are children.

The clinic opened under chaotic conditions with only Jinpa as the doctor, referring patients to Lisa Schrempp, an ayurvedic massage therapist who flew in from Arizona, and Ven. Thupten Punstok, another Haitian monk who served as her translator and medicine preparer. The next day, Jinpa hired Oliama: a local bone-setter, midwife and herbalist in the Afro-Haitian tradition. This greatly increased the range of what the clinic could offer, providing complete treatment for those who had been physically injured in the quake. 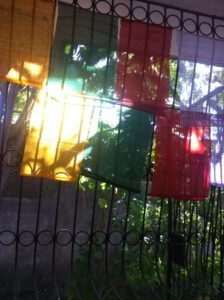 We set up our clinic on verandas, in front of houses in poor neighborhoods, or we were hosted by schools or churches; we went to areas where no other help was available, to serve the very poor. They would put out a table and chairs under a tarp, and we would come and treat the never-ending, pushing crowd. We went to different neighborhood each day but then returned two or three times to the same spot, which allowed us to reach a huge crowd of people and also provide follow-up consultations. This gave us feedback on the quality of the care we provided, and it was especially precious for the children with head traumas or other very bad cases.

What we found were no longer open wounds of fresh injuries, but rather a host of traumatized people with every single imaginable trauma-induced psychosomatic disease, especially headaches, belly aches, lack of appetite, depression, heart palpitations, suffocating feelings (not dust induced) and eye aches or tearing eyes as if crying. So whenever they told us their symptoms started after the earthquake, we treated for shock and trauma.

Often, the people would not tell us their earthquake story, because the suffering and misery of the refugee-from-their-houses-situation was more overwhelming than the trauma: we saw thousands of children with worms, infected mosquito bites that they had scratched open, debilitating malarial fevers, severe diarrhea from dirty water, flu and coughs from camping out in the cold etc. They asked to be treated for fever, and it was up to us to ask for their heartbreaking stories from the earthquake. 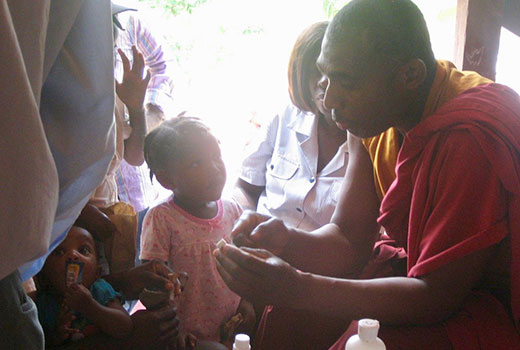 By day five our stock of natural remedies was dwindling fast, due to the unforeseen size of the crowd, and Jinpa asked naturopath Julia Graves to fly in from France. In just 48 hours she raised an amazing $2,500 in contributions plus another $4,000 worth of donated natural remedies, which she loaded into three huge suitcases when she passed through New York. She arrived one week after the clinic started, which was perfect because it gave Jinpa the chance to assess the situation and tell her over the phone what we had failed to anticipate and which supplies were most desperately needed. She brought two sets of cupping glasses, which greatly increased Oliama’s range of action, and we now had remedies to treat malarial fevers, head trauma and other conditions we had not been able to address before.

The number of people we were able to see per day tripled from one day to the next, and we were now serving about 300 people per day. We had become more organized, arranging people to line up for the two doctors, and from there to move on to the massage, cupping or bone-setting if necessary. The driver, Pierro, and another helper prepared essential oil custom mixes, bagged herbs, and performed numerous other tasks according to Jinpa’s and Julia’s instructions.

A nearly overwhelming stream of need

With 100 people in an avalanche-like crowd, pushing and squeezing in line, a deafening din of people screaming, working six or seven hours without as much as a pee break and having the sweat run down head to toe in the humid heat, it was easy to forget the earthquake drama we had come to treat. Thousands of depressed, blank stares from coughing, feverish children covered with oozing sores. A sudden, grateful look from those dark eyes, which moments before held only the ghost of an extinguished soul — those eyes came back to life the moment we gave the right remedy.

None of this would have been possible without Jinpa, who as a Haitian knew how to get around, control the crowd, deal with the money, make sure we ate clean food, arrange our bodyguards, and enlist his friends and family to make us safe. In this way, we felt safe to run the clinic during further aftershocks, while people were getting possessed by pig spirits right next to us, or while voodoo bands marched past.

What made us different 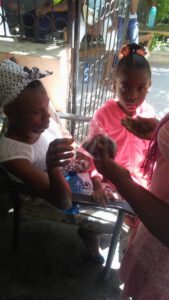 Our naturopathic clinic — the only one created in the aftermath of the earthquake — was not just another foreign relief effort. Oliama’s participation was invaluable, since he understands the people from the inside out, and was effortlessly in tune with their medical and cultural needs. We decidedly did not want to be the rich white people rushing in and imposing our trip onto the suffering black masses.

Instead, we were the first clinic ever to hire a local herbalist and bone setter – an honor Oliama had never experienced before in his life. By having him on the team, we visibly gave value to the native medical system, encouraging the people to remember their own resources. The clinic demonstrated that expatriate Haitans as well as their own root doctors are all part of the effort to rebuild the country and its people after such devastating events.

Oliama and Pierro told us that people were frightened of the clinic at first, worried that they would get force-vaccinated (which happens at most free clinics). Haitians do not like vaccinations because they observe how it makes them sick. They were delighted to hear that our clinic was naturopathic, and they loved the remedies we gave them. Many people first came and asked “Do they do vaccinations here?” When we said no, they responded “Good, then I will stay for a treatment.”

We also gave people dietary and herbal advice such as eating raw garlic or boiling four kinds of local leaves to cure anemia; or to sow some of the chamomile seeds from the tea to grow their own. In that sense, we provided models of local resourcefulness and empowered the people to take care of their health. Many people seemed positively roused by the recognition that they could go see one of their own bone setters or root doctors, or make themselves an herbal tea. We ran out of iron supplement syrup very fast due to the high incidence in anemia. Our root doctor and bone setter Oliama told us the local herbal cure for anemia. We started to write it on paper and hand it out to all the women concerned. Later, we added advice for herbal mixes for low blood pressure, acid stomach etc. The clinic was thus educational as well as healing, empowering to the locals to remember their own resources.

We feel that the clinic was an incredible success, successful beyond our wildest dreams. People were so grateful. They expressed how forsaken by humanity they felt, and that our coming made them feel like they were not completely forgotten, that we were sent by God. We received countless stories of people being healed, especially from the essential oil rubs for coughs, colds, skin infections, and rheumatic pains; the homeopathic treatments for fever, diarrhea, and injury; the bone-setting; and the emotional healing from the flower essences and ayurvedic massage.

For example, one day we were invited to come to a school next to one of the makeshift tent villages that had sprung up everywhere. The children there were all depressed, no longer playing or eating. We were told to expect 25 children, but just before we arrived they called to say there were 75 children in line. When we walked into the bursting room, there were more than 100 children. By the end of the day, we had treated at least 200… and they were running and playing again, squealing so happily that we could barely hear our patients.