Oliama (to the far left) with the clinic staff

Oliama Deriviere (which means “of the river”, and the Water Goddess is the one who bestows the knowledge of healing in an underwater-initiation) was born as the oldest boy into a family of traditional Afro-Haitian healers. Trained since childhood in herbalism, traditional bone setting, and midwifery, his training also included subjects such as using the power of prayer, dream work, and astral traveling. The power of being a healer is passed down to only one child in such a family. Both of his father and mother were outstanding healers, and they passed their power to Oliama.

He never received formal schooling, and the fact that he was illiterate nor spoke French (the language of the educated) caused him much pain and embarrassment for the rest of his life. As an adult, he received such recognition for his healing skills, that the doctors at the hospital asked him to work as their assistant. “They asked me to fix all the difficult cases they did not know to treat”, he said “but always made it look like they had cured the person. I was severely underpaid and treated badly, so I finally quit” he continued with bitterness.

After the earthquake catastrophe, many people from his neighbourhood had badly smashed limbs and were lined up for amputation surgery. Seeing them, Oliama said “I can fix you”. Taking them home, he set their bones, applied herbs and healed their legs so they can now walk again.

Oliama setting the neck of a man with a fresh concussion

Raised in the (non-black magic) voodoo tradition, Oliama converted to Christianity as an adult and became a fervent follower of Jesus. He always had us clinic staff on our knees praying to the Lord. By that time, Haitian herbalism and traditional healing had completely fallen out of favor, so after leaving his job at the hospital, Oliama worked as a brick layer, paid a few cents for each brick he laid. This was gruelling work for someone who had had childhood polio, as he was somewhat limping and struggling to walk.

Oliama married young, but his first wife, once pregnant, did not adhere to his expert herbal and midwifery advise, which ended in miscarriage and her subsequent death. He later married Nelia, with whom he had nine children. They managed to build a small house in the slums of Petionville, a garbage-filled ravine on the outskirts of Port-au-Prince. Nelia also comes from a family of healers, and Oliama trained Nelia in much of what he knew.

We continued to interview various traditional local healers for the Haiti clinic, but could never find anyone else whose knowledge and skill level could match that of Oliama. He provided an invaluable addition to the service we could offer at the clinic, as well as deep insight into local traditional healing models and herbs. Outside of clinic periods, Oliama served as the slum emergency midwife, delivering about 20 babies a month free of charge, as well as being called upon by his neighbors for all kinds of other medical emergencies by those who could not afford the hospital.

About a year ago, Oliama fell ill with diabetes and almost died at the hospital. At that time, we (Jinpa and Julia) sent some money to pay for his treatment. He joined us for the spring 2013 clinic, a shadow of himself and greatly weakened.

His death came suddenly. Oliama passed in a diabetic coma, probably brought on by his lack of proper food. Always struggling to send all of his children to school, he ate only the cheapest of food: white flour and white sugar—which he should never have eaten.

As a result of working for us at the clinic—for being seen work hand-in-hand with these magnanimous “foreign gods” from the mysterious rich countries—his recognition in his neighbourhood greatly improved. People suddenly remembered “Oh yes, we have natural medicine, too! I can go to see my local leaf doctor!”

Because of him, the clinic also came to serve the slum on several occasions, and he received the credit for having brought free treatment to the area. Seeing Oliama work side by side with us was a further strong endorsement of him in people’s eyes. Each clinic would bring Oliama a new small stream of clients, and those in a position to pay would do so.

Working at our clinic meant he was able to stop working as a brick layer, instead working from home as a healer. He brought some of his clients to see us for a free homeopathic treatment, which further cemented his status, and he learned to add some homeopathic Arnica to his bone setting sessions!

We will always remember Oliama with fondness, and remain grateful for all he contributed to the clinic and its 15,000 patients. He was instrumental in some of the lives we saved in our last five missions.

Oliama was a true master in his tradition: a docteur feuille or leaf doctor. Sadly, discrimination had taught him to be ashamed of his African roots. It is ironic that the first recognition for being a master of his art came from us, traditional healers trained in developed countries. He savored our admiration for his knowledge and was as eager to learn from us as we were from him. Co-treating patients with him at the clinic was one of our joys.

His death is a great loss to his country and his tradition. Living a small life with little recognition, he was nonetheless possibly the greatest docteur feuille left in all of Haiti. A master diagnostician, he said “When I saw you (foreign healers at the clinic) diagnose people by looking at patients and by touching them, rather than with machines and tests, I knew you were true healers.”

While we know that he was not able to pass every single one of his skills to Nelia, we will continue to do our utmost to have her work with us at the clinic. We hope she may be able to carry on their little herbal practice, part of a very shy renaissance of natural healing in Haiti which has been greatly helped by the US culture’s embrace of traditional herbal methods. It will of course be much harder for her, as a woman healer in a still very patriarchal society. 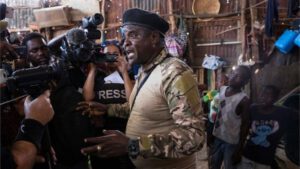